Testimonials
The trial period has expired please purchase if you like to continue using the theme.

What are many of the most respected and experienced Jiu-Jitsu teachers and school owners saying about Hidden Jiu-Jitsu?

Here's what people are saying about Henry Akins' Hidden Jiu-Jitsu:

"I never miss one of Henry's seminars.

His ability to break down techniques that we think we all know at white belt, but make them better, even after you've been a black belt for years like I have, is second to none.

He's just a master of the basics and finding little details that will make the stuff you abandoned years ago because you don't think it works, actually work for you, and the white belt level stuff work at the black belt level, and be able to work on anybody....

My mind is blown every time."

"Henry is one of my very favorite people in the world to train with. I look forward to every single opportunity I get to learn from him and exchange ideas with him, because this is the type of Jiu-Jitsu that I'm interested in."

- Stephen Whittier, 3rd Degree Black Belt under Roberto Maia, "One of the most decorated martial arts instructors in the country."

"I would take Henry's stuff and use it as my 'secret Jiu-Jitsu hack' for years... Every time he's here he shows something new, magical, that is game changing."

"Even my black belts were raving... I cannot recommend him enough... you will get better in one night, trust me!"

"I can't recommend him highly enough..."

"Been doing Jiu-Jitsu for a little more than 20 years. I met Henry when I started, in fact, so I've known him for a very long time.

And he was blowing my mind then, and he continues to blow my mind now.

It's the purest form of Jiu-Jitsu I've been exposed to, other than Rickson. It's amazing. Great guy...

Shows every single micro detail, so it's really not about athleticism, it's about how to apply leverage, space, time..."

"When people ask me what the seminar is going to be on, I told them it doesn't matter. Because no matter what Henry focuses on, your level of understanding is going to grow ten fold."

"The thing I love about the whole, you know, Hidden Jiu-Jitsu style is... you got Jiu-Jitsu whether it's sport, street, self-defense, MMA... I fight MMA... it works no matter what it is... in a gi, out of a gi, same grips, same pressure, same everything... it's beautiful, and very useful."

"I just absolutely love having Henry come in to teach because... it's always fundamentals... "

"This is one of the best seminars I've been to, bare bones basics but the details were awesome."

"It reminds you of that, for me, starting Jiu-Jitsu in the 90s, it reminds me of that magic, where Jiu-Jitsu just felt like a superpower!"

"The reason I always like seminars with Henry is because he just demonstrates simple techniques that are extremely effective and have efficiency of movement. Some of the best Jiu-Jitsu I've ever learned."

"The most useful part is the concepts Henry is teaching are very easy and very simple to understand. You don't have to be athletic, you don't have to have speed. I always learn a lot every time I train with Henry."

"Henry is by far one of the most technical instructors...

You will gain details on techniques you've known your entire life, you will walk away just astounded by their effectiveness to work on anybody, regardless of their size or strength...

I can tell you, even as a black belt, training under Henry, it feels like I'm a white belt again in many cases... and that's the fun of it!"

"Henry just came out to my school and everyone is using that phrase, 'mind blown'! I've trained with this dude multiple times, I know what to expect, and still he exceeds my expectations!"

"I don't know how many seminars I've been to of Henry's, but it never fails, even if it's the same items covered, you always leave with a little piece of the puzzle you didn't have before! And the simplicity, it's the Jiu-Jitsu a white belt can do or a black belt can do."

"This is probably my dozenth seminar with Henry Akins... he is phenomenal!

Every single seminar he ends up showing something either very subtle or very basic that ends up improving my game dramatically.

So I am just in awe every time I see Henry, it's just an amazing experience with him!"

"Phenomenal instructor, one of the best instructors I've ever trained with, and I've been doing this a long time.

"I've been doing Jiu-Jitsu for over 15 years, and I really appreciate the fine level of detail that I saw here.

Even when we saw moves I've been exposed to previously, the details that I saw here today are really going to make a big difference."

"This is always such a blast for me because I actually started at Rickson's when Henry was a brown belt, he was my first Jiu-Jitsu instructor.

I'm just always so impressed, and it was such a pleasure to train with him."

"Incredible details... I've been a black belt since 2010... and Henry makes me feel like a white belt, so if you get the chance, please go out and see him."

"The details are incredible, his instructor style seems to be ego-less, he gives the information in a sort of scientific format and easy to learn. He's really connected with the students... and I'm definitely coming back!"

"Had a great time with Henry today looking at some Hidden Jiu-Jitsu, really enjoyed the details... really looking forward to bringing this information back to our team in Athens."

"I've been training Jiu-Jitsu for 17 years, I picked up a lot of little details to stuff that I thought I already knew, so now I'm looking forward to refining it further. It's all about the details, excellent seminar!"

"The amount of details was just excellent. I couldn't recommend this enough to anyone."

"I always like the simple, precise...small details that are amazing, it always adds something to my game... always connects that missing link for to make everything flow together."

"This is my fourth seminar with Henry. I first trained with Henry in 2012 and have been sold ever since. His pressure, for someone who isn't incredibly gigantic, it feels like 200-300 lbs. heavier than what he actually is. Advanced basics..."

"I've been training for a little over 20 years... what it gave me was, it was nothing I hadn't seen, but the techniques were done in a way I hadn't seen and that I want to utilize."

"I've been coming to train with Henry off and on for years and today's seminar was just literally... I know it's cliche, but mind blowing.

Simple, effective, nothing flashy but, it just works. And it's just so simple to remember, you don't even really need to take notes."

"I go to every Henry seminar I can get to.

I've had the good fortune to travel around the world and train with a lot of great instructors and famous names, and I still place Henry, literally, at the top of the list."

"It's amazing Jiu-Jitsu. He's going to break it down so that everybody gets it, at each person's pace. Don't miss out man, get your game to the next level and enjoy it."

"It was about an hour and a half [drive] to get here to Henry's seminar, and I would have walked to have learned what I learned...

He changed 2 or 3 things I thought I was doing right for 9 years, and just that quick, I feel like everything I've done up until that point was completely wrong.

It was the best seminar I've ever been to the, the best instruction I've ever got. My instructors, it looked like to me, were also learning. Everything was awesome, my mind is blown. Thank you." 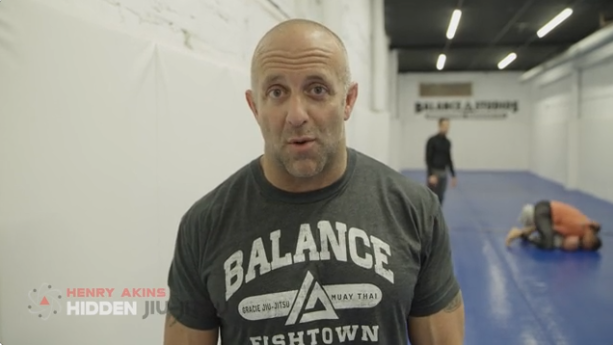 "I try to get around Henry as much as I can.

He shows little things that make an instantaneous difference.

"The seminar was amazing.

It's the small details that make all the difference in the world.

"Henry Akins is the best... we always get a huge amount of information from him."

"Five years ago I was ready to hang up my Jiu-Jitsu career as a blue belt making absolutely no progress.

A friend of mine invited me to a Henry Akins seminar and it changed everything.

I've been to tons of different seminars... and this is the best value I have ever experienced in a seminar environment in my life."

"Everything is so basic, but so effective.

Things that seemed should have been obvious because I'm a brown belt I didn't know.

I got a TON out of it, highly recommend it."

"The techniques were very fluid and natural feeling and they were simple but a strong basis for Jiu-Jitsu."

"I'm from Montreal, I flew in just for Henry's seminar tonight.

The details Henry showed I have never seen...

And now I'm not just going back and trying to remember five or six submission defenses, I'm actually working on an idea I can apply across the board to a lot of different things." 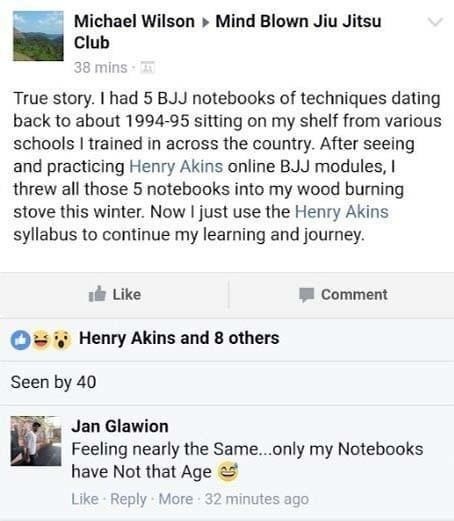 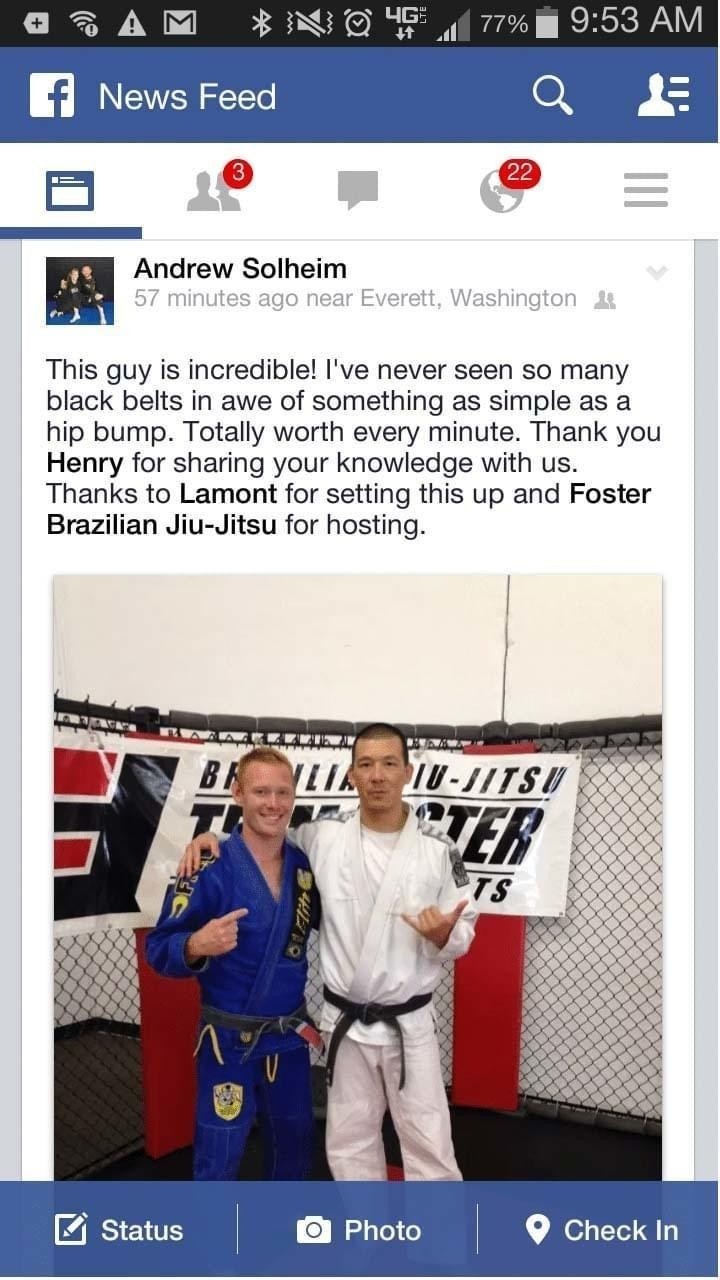 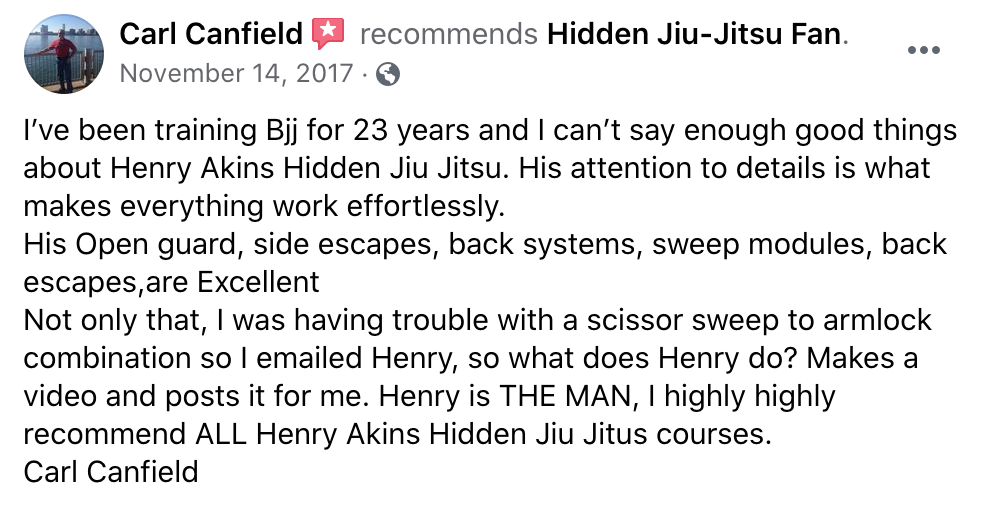 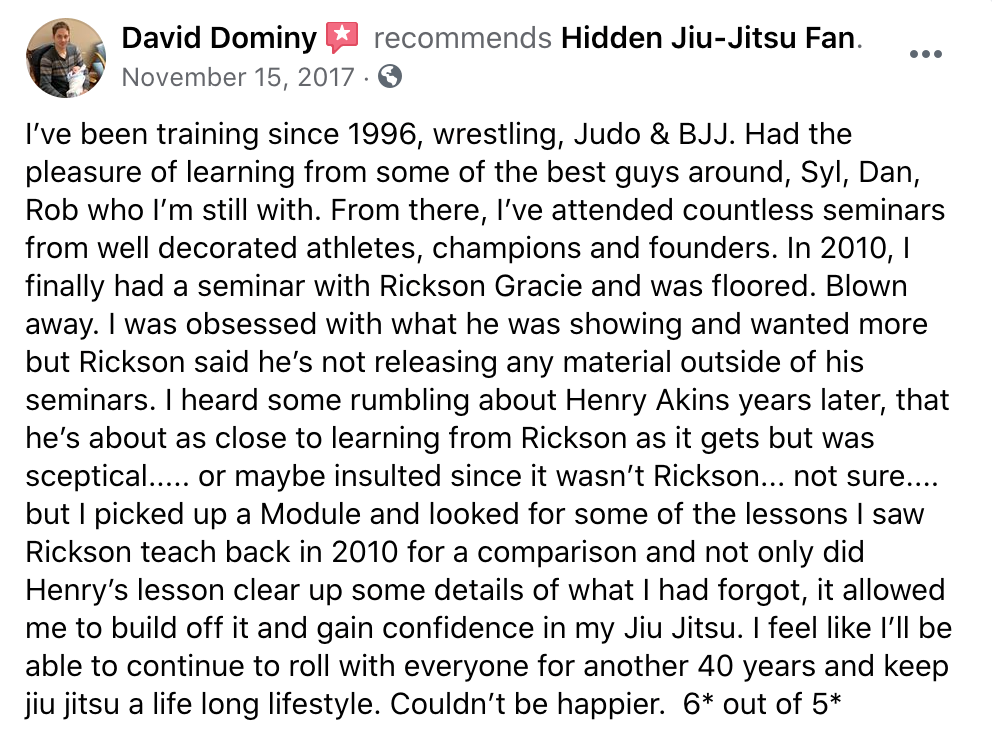 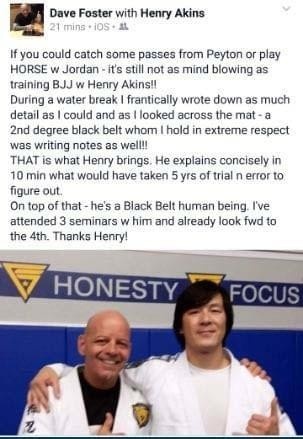 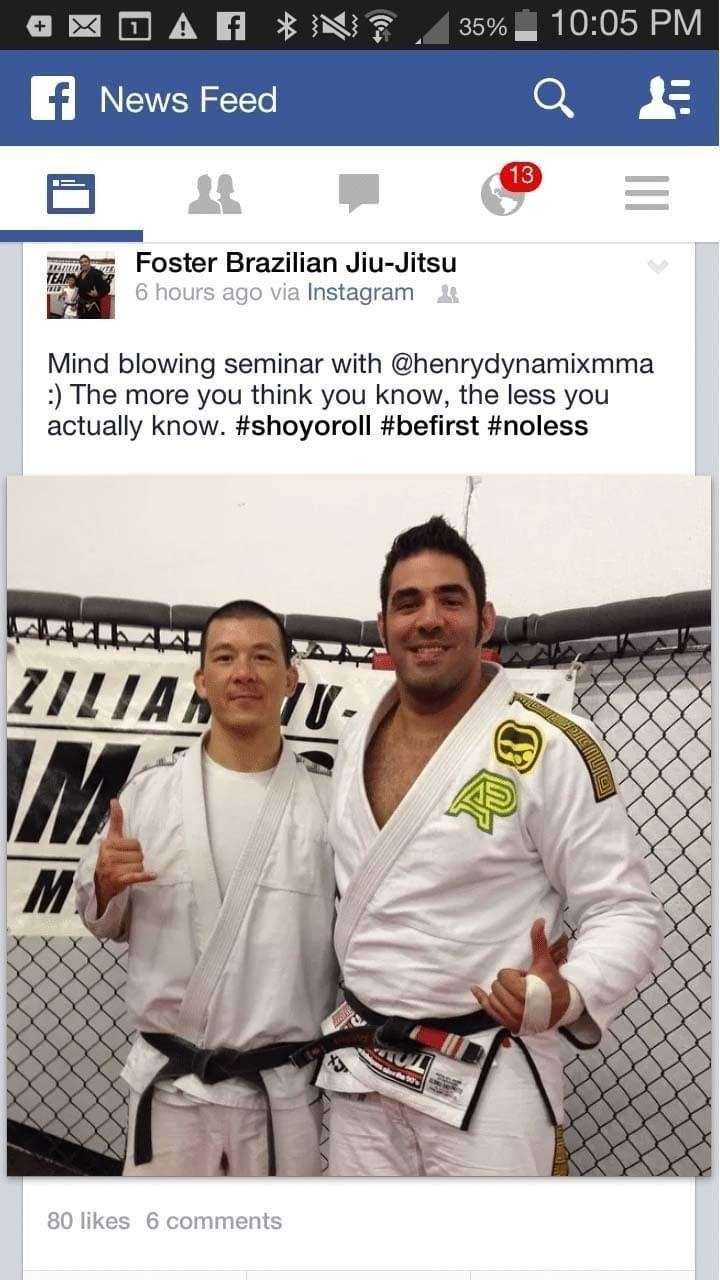 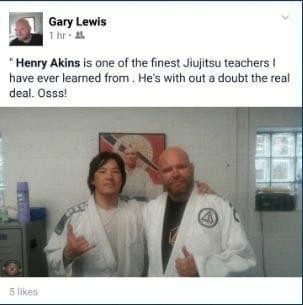 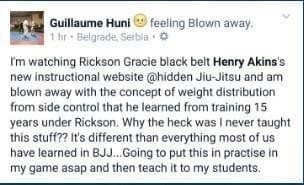 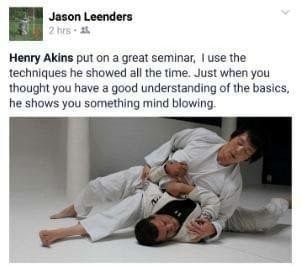 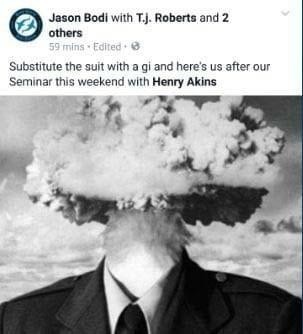 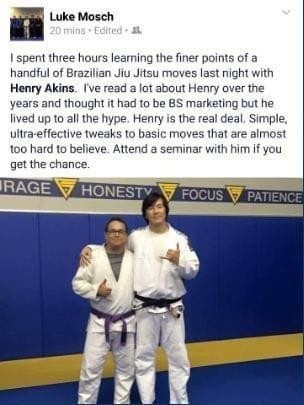 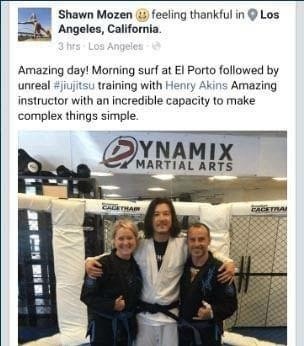 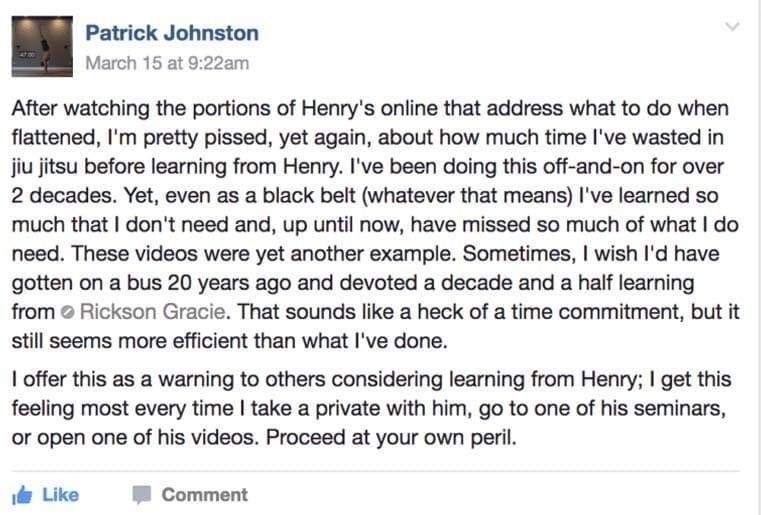